Notanee Bourassa knew that what he was seeing in the night sky was not normal. Bourassa, an IT technician in Regina, Canada, trekked outside of his home on July 25, 2016, around midnight with his two younger children to show them a beautiful moving light display in the sky — an aurora borealis. He often sky gazes until the early hours of the morning to photograph the aurora with his Nikon camera, but this was his first expedition with his children. When a thin purple ribbon of light appeared and starting glowing, Bourassa immediately snapped pictures until the light particles disappeared 20 minutes later. Having watched the northern lights for almost 30 years since he was a teenager, he knew this wasn’t an aurora. It was something else.

From 2015 to 2016, citizen scientists — people like Bourassa who are excited about a science field but don’t necessarily have a formal educational background — shared 30 reports of these mysterious lights in online forums and with a team of scientists that run a project called Aurorasaurus. The citizen science project, funded by NASA and the National Science Foundation, tracks the aurora borealis through user-submitted reports and tweets.

The Aurorasaurus team, led by Liz MacDonald, a space scientist at NASA’s Goddard Space Flight Center in Greenbelt, Maryland, conferred to determine the identity of this mysterious phenomenon. MacDonald and her colleague Eric Donovan at the University of Calgary in Canada talked with the main contributors of these images, amateur photographers in a Facebook group called Alberta Aurora Chasers, which included Bourassa and lead administrator Chris Ratzlaff. Ratzlaff gave the phenomenon a fun, new name, Steve, and it stuck.

But people still didn’t know what it was.

Scientists’ understanding of Steve changed that night Bourassa snapped his pictures. Bourassa wasn’t the only one observing Steve. Ground-based cameras called all-sky cameras, run by the University of Calgary and University of California, Berkeley, took pictures of large areas of the sky and captured Steve and the auroral display far to the north. From space, ESA’s (the European Space Agency) Swarm satellite just happened to be passing over the exact area at the same time and documented Steve.

For the first time, scientists had ground and satellite views of Steve. Scientists have now learned, despite its ordinary name, that Steve may be an extraordinary puzzle piece in painting a better picture of how Earth’s magnetic fields function and interact with charged particles in space. The findings are published in a study released today in Science Advances.

“This is a light display that we can observe over thousands of kilometers from the ground,” said MacDonald. “It corresponds to something happening way out in space. Gathering more data points on STEVE will help us understand more about its behavior and its influence on space weather.”

The study highlights one key quality of Steve: Steve is not a normal aurora. Auroras occur globally in an oval shape, last hours and appear primarily in greens, blues and reds. Citizen science reports showed Steve is purple with a green picket fence structure that waves. It is a line with a beginning and end. People have observed Steve for 20 minutes to 1 hour before it disappears.

If anything, auroras and Steve are different flavors of an ice cream, said MacDonald. They are both created in generally the same way: Charged particles from the Sun interact with Earth’s magnetic field lines.

The uniqueness of Steve is in the details. While Steve goes through the same large-scale creation process as an aurora, it travels along different magnetic field lines than the aurora. All-sky cameras showed that Steve appears at much lower latitudes. That means the charged particles that create Steve connect to magnetic field lines that are closer to Earth’s equator, hence why Steve is often seen in southern Canada.

Perhaps the biggest surprise about Steve appeared in the satellite data. The data showed that Steve comprises a fast moving stream of extremely hot particles called a sub auroral ion drift, or SAID. Scientists have studied SAIDs since the 1970s but never knew there was an accompanying visual effect. The Swarm satellite recorded information on the charged particles’ speeds and temperatures, but does not have an imager aboard.

“People have studied a lot of SAIDs, but we never knew it had a visible light. Now our cameras are sensitive enough to pick it up and people’s eyes and intellect were critical in noticing its importance,” said Donovan, a co-author of the study. Donovan led the all-sky camera network and his Calgary colleagues lead the electric field instruments on the Swarm satellite. 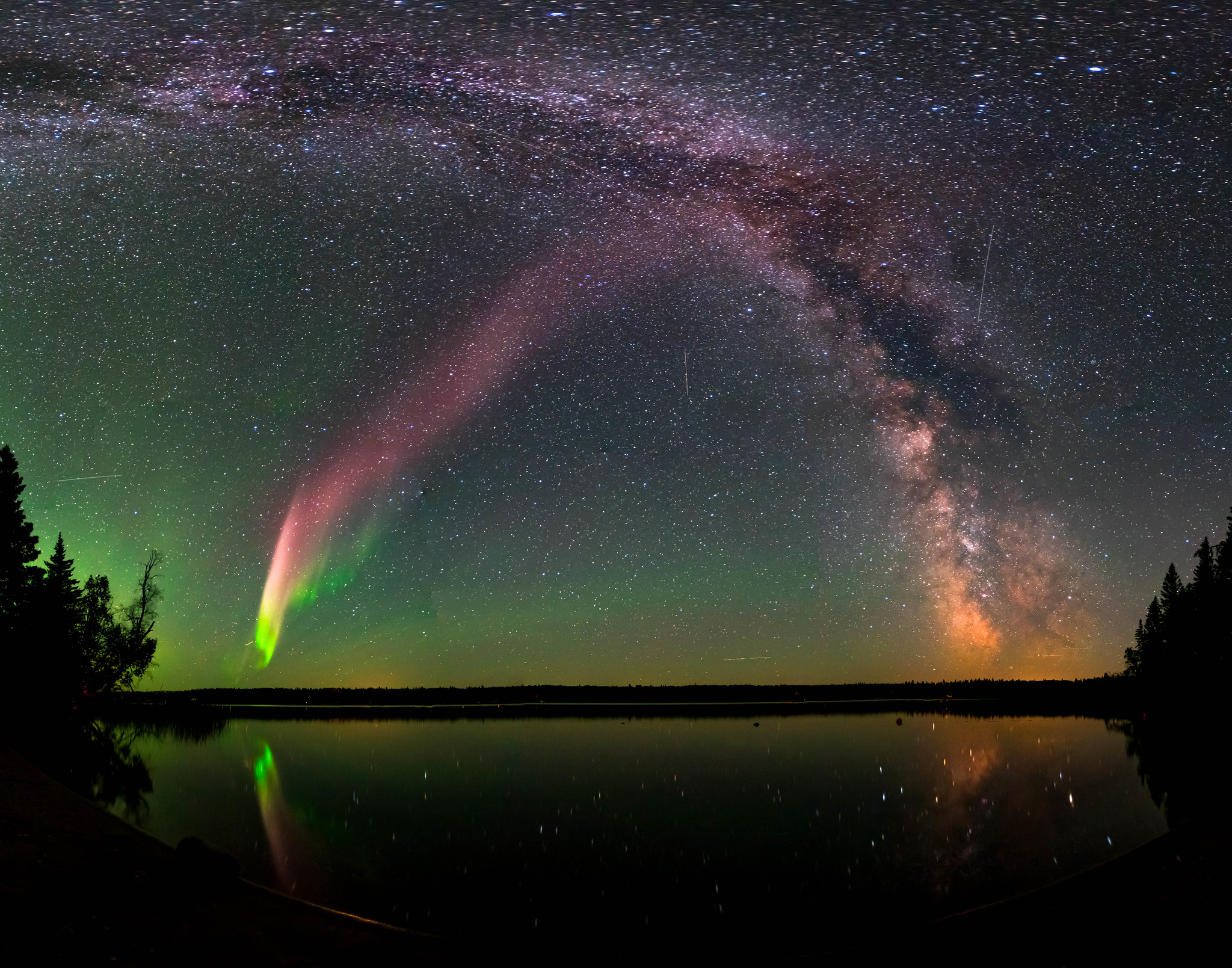 Second, Steve consistently appears in the presence of auroras, which usually occur at a higher latitude area called the auroral zone. That means there is something happening in near-Earth space that leads to both an aurora and Steve. Steve might be the only visual clue that exists to show a chemical or physical connection between the higher latitude auroral zone and lower latitude sub auroral zone, said MacDonald.

“Steve can help us understand how the chemical and physical processes in Earth’s upper atmosphere can sometimes have local noticeable effects in lower parts of Earth’s atmosphere,” said MacDonald. “This provides good insight on how Earth’s system works as a whole.”

The team can learn a lot about Steve with additional ground and satellite reports, but recording Steve from the ground and space simultaneously is a rare occurrence. Each Swarm satellite orbits Earth every 90 minutes and Steve only lasts up to an hour in a specific area. If the satellite misses Steve as it circles Earth, Steve will probably be gone by the time that same satellite crosses the spot again.

In the end, capturing Steve becomes a game of perseverance and probability.

“It is my hope that with our timely reporting of sightings, researchers can study the data so we can together unravel the mystery of Steve’s origin, creation, physics and sporadic nature,” said Bourassa. “This is exciting because the more I learn about it, the more questions I have.”

As for the name “Steve” given by the citizen scientists? The team is keeping it as an homage to its initial name and discoverers. But now it is STEVE, short for Strong Thermal Emission Velocity Enhancement.

If you live in an area where you may see STEVE or an aurora, submit your pictures and reports to Aurorasaurus through aurorasaurus.org or the free iOS and Android mobile apps. To learn how to spot STEVE, click here.